The Ups and Downs of Open-Source Project Sponsorships

Big-name tech companies often realize a tremendous return on their open-source investment. However, when a project’s single sponsor has a sudden change in strategy, developers can be left in the lurch. The most recent example of orphaned open-source projects are Groovy and Grails, which Pivotal plans to cease supporting as of March 31.

A lot of developers were caught by surprise when Pivotal announced on January 19, 2015, that it was ending its sponsorship of the open-source Groovy Java JVM and its Grails web development environment. In a January 20, 2015, post on I Programmer, Alex Armstrong states that Pivotal’s decision demonstrates the dangers of relying on a single vendor to keep an open-source tool viable.

Pivotal’s Mike Maxey explains the company’s decision to end its sponsorship of Groovy and Grails at versions 2.4 and 3.0, respectively, as motivated by the company’s plan to focus on commercial and open-source platform-as-a-service (PaaS), data, and agile development projects. Pivotal will honor existing commercial support contracts for Groovy and Grails beyond the March 31, 2015, cutoff date for its sponsorship.

As I Programmer’s Armstrong points out, Pivotal’s announcement is not the end of the world for Groovy and Grails. The community of developers using the tools will be able to support them in the short term, but ultimately deep-pocket sponsors will be needed to fund the development required to keep pace with the competition.

The egalitarian reputation of the open-source community is challenged by the results of a Network World survey identifying the sponsors of 36 big-name open-source nonprofits and foundations. John Gold reports on the survey results in a January 9, 2015, article. The most prominent name on the rosters of open-source sponsors was Google, which helps fund eight of the 36 organizations. 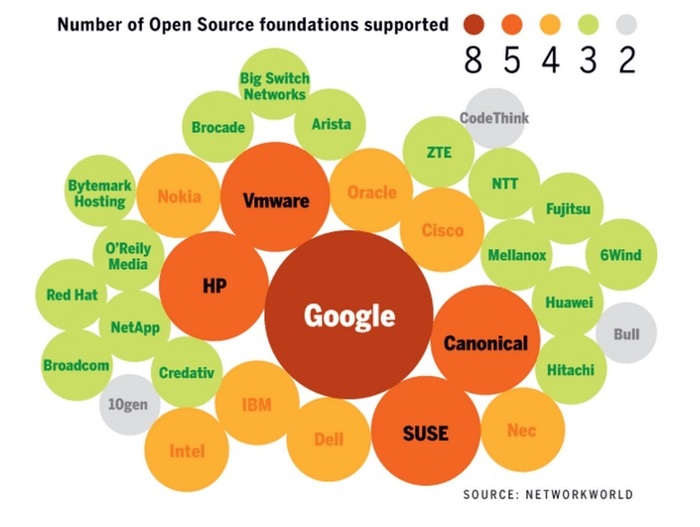 The most-prevalent sponsor of the 36 open-source projects surveyed was Google, which contributes to eight of the groups. Source: Network World

Other major players among the open-source sponsors were Canonical, SUSE, HP, and VMware, which each supported five of the groups; and Nokia, Oracle, Cisco, IBM, Dell, Intel, and NEC, each of which contributed to four open-source projects. Pro Publica’s nonprofit records indicate that the average annual revenue of the 36 organizations in Network World’s survey is $4.36 million, although two organizations skew the average: the Wikimedia Foundation ($27 million in revenue) and Linux Foundation ($17 million).

What open-source sponsors receive in return

You might think that a sponsor’s funding gives it an opportunity to contribute to the project’s code, but Network World’s Gold claims that isn’t always the case. In fact, the primary benefit to sponsors is access to the open-source project’s community of users, whether as potential employees or customers, or both.

In contrast to seeking sponsorship from one or more tech giants, FreedomSponsors takes a crowdfunding approach to supporting free and open-source software projects. As the site’s FAQ explains, it works by allowing people to place money bounties for solutions to the problems that are most important to them, and allowing developers to collect bounties when they provide the solution. 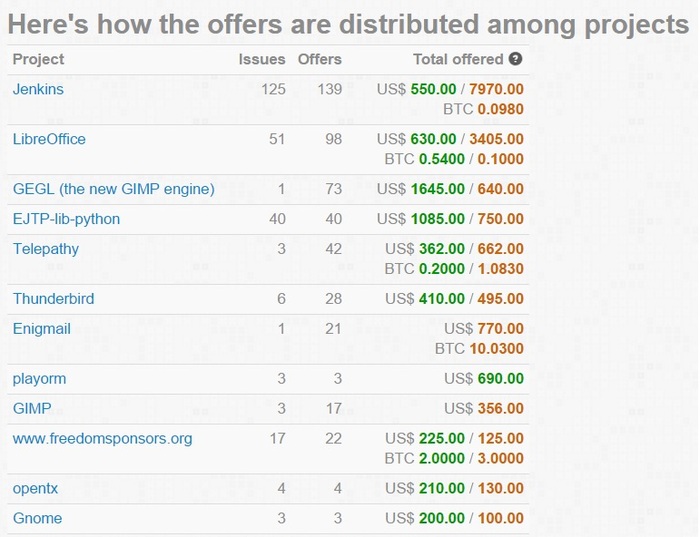 Until it is able to create a reputation system, FreedomSponsors will rely on a trust-but-verify model, which doesn’t necessarily engender a lot of confidence in the system. Still, the people behind the site get double bonus points for making the effort.

A more typical approach to vendor support for an open-source project is Microsoft’s MS Open Tech subsidiary, which has joined with education-technology service Remote-Learner to integrate Office 365 with the Moodle cloud-based learning system. The project is described in a January 19, 2015, article on Business Cloud News.

The benefits of the project to Microsoft are obvious: direct hooks between Office 365 and Moodle ensures an installed base of mostly young students for Microsoft’s nascent cloud version of Office.

For a worry-free approach to managing heterogeneous MySQL, MongoDB, Redis, and ElasticSearch databases, check out the new Morpheus Virtual Appliance, which combines all the controls you need in a single dashboard. Morpheus is the first and only database-as-a-service (DBaaS) that supports SQL, NoSQL, and in-memory databases across public, private, and hybrid clouds.

With Morpheus, you can invoke a new database instance with a single click, and each instance includes a free full replica set for failover and fault tolerance. Your MySQL and Redis databases are backed up and you can administer your databases using your choice of tools. Visit the Morpheus site to create a free account.